When Patricia Arquette won the Oscar for best supporting actress this year, her acceptance speech declared equal pay and opportunity for women in the country.  It was a statement that brought big shots like Meryl Streep and Jennifer Lopez to their feet.

This is a struggle that women have been facing throughout the country and in Hollywood.  Trying to make it in the industry can be brutal.  And having to break in as a woman doesn’t make the situation easier.

In 2007 Helenna Santos moved to LA from Canada to fulfill her dreams.  Admittedly, she anticipated the city to join in her in a rousing chorus of, “The hills are alive with the sound of music.”  She knew fame or success wouldn’t be instant, however Santos says, “I really had no idea just how difficult it would be.  This city is a beast and I had no idea what I was in for, even though I thought I did.”

A Road Map For Thriving In Hollywood

Since moving to Los Anglees, Helenna Santos has found success as a producer, writer, actor, and she is the founder and CEO of Ms. In The Biz.  Ms. In The Biz is an online community for women to share resources, wisdom, and foster growth.  The site has been building and sustaining a network of women in the entertainment industry since 2013.

Filmmaking Stuff: Was it challenging to launch msinthebiz.com?

Helenna Santos: I’m kind of a “serial connector.”  I love people. I get my energy off of being in groups and feeding off of one another.  I’ve always gathered groups of people and surrounded myself with people who lift me up.  To me it is never been draining because that’s where I get my energy.  Ms. In The Biz is literally an off-shoot of just me in the everyday.  It’s a place where a lot of like-minded women can create a community to thrive off of.

Filmmaking Stuff: Your personal adventure gave you a sense of need for women to find more opportunities.

Helenna Santos: Every woman I know is sick of the lack of opportunity.

Filmmaking Stuff: Has this led to women creating opportunities for themselves?

Helenna Santos: Yes, absolutely.  Look at the great success Reese Witherspoon has had this past year creating work for not only herself but other women as well. There were other leading ladies who have started their own production companies before her, but I think that Wild and Gone Girl hit at just the right time when the zeitgeist was calling for it.

Filmmaking Stuff: Jane Fonda recently said that men hire others who think like them, implying that would be other men.  Would you agree?

Helenna Santos: In the past men traditionally hired men only because that was the norm at the time, but the norm is shifting.  Now I think people actively look for women in positions that were traditionally male dominated.  We still have a really long way to go but it’s definitely getting better.  With organizations like Women in Film and the Geena Davis Institute there is a lot more conversation and awareness around the issue.  I think that Ms. In The Biz is also adding to this cultural shift.

Filmmaking Stuff: So, your company continues to evolve with the times.

Helenna Santos: It’s the reason that we started the #HireAMs database. It is a place to go to find a female DP, writer, producer, director, script, crafty, sound designer and other professionals. This way, when filmmakers are crewing up, they can come to our site and find some seriously talented ladies to hire.

Filmmaking Stuff: And to go a step further, the more women behind the scenes will affect women’s presence on screen?

Helenna Santos: In order for what we see on screen to change women must have better representation behind the camera. We need more women writing the stories and making movies and creating television overall. This also includes minorities. The acting world likes to use the phrase “ethnically ambiguous.” And I am constantly shocked at how little entertainment actually reflects the world we live in.

Filmmaking Stuff: Do different mediums, like television, have different setbacks or opportunities?

Helenna Santos: Television has given women a great chance to show their talent, but I wouldn’t say that they are necessarily more prolific in TV.  There are incredible female producers, actors, directors, writers in both art forms.  But I know what you are getting at.  Shonda Rhimes is kicking ass which is proof that television is a great vehicle for women to have our stories told over film simply because of the fact that it seems more risks are being taken on that platform.

Filmmaking Stuff: What do you mean by risk?

Helenna Santos: “Risk” since that seems to be the way the film industry sees female driven stories.

Filmmaking Stuff: What about online platforms?

Helenna Santos: I think the digital world has definitely opened things up for women in a way that we haven’t seen before.  Just look at Jenji Kohan on Netflix (Orange is the New Black) as well as Jill Soloway on Amazon (Transparent).

Filmmaking Stuff: You recently stated that an estimated 54% of your readership is male. Why is that significant?

Helenna Santos: It shows that women have a lot more support in this industry than we think we do. Also, it shows that Ms. In The Biz is full of really useful information no matter if you are male or female.

Filmmaking Stuff: How important is it to develop your craft while developing your brand?

Helenna Santos: Anyone who is an artist first and foremost who is uncomfortable with the idea of being a business person. Unfortunately these people need to learn the art of marketing themselves because this industry is saturated. There are a gazillion filmmakers and even more actors. In order to rise out of the masses, we all need to put on our entrepreneur hats.

Helenna Santos: The age of just being talented and waiting to be “discovered” for your talent and artistry are over, if that was ever true.  Okay. That’s hyperbole since there are definitely some people whose talent will carry them out of obscurity. But the reality is, most of us need to “hustle” is more than ever.

Filmmaking Stuff: And the internet seems like a good place to start.

Helenna Santos: When I graduated university with a BFA in acting, there wasn’t really a need to even have a website. Now, if someone isn’t Google-able they might not be hired, because if there is a person equally qualified for the job and they are visibly active on social media and “get” the world we live in, that’s the person who will book the job.

Filmmaking Stuff: And it seems like Ms. In The Biz builds support, fosters networks, and helps women develop their online profiles too.

Helenna Santos: Yes, and another reason Ms. In The Biz exists is to help propel all of us forward and move our society on from the ridiculous sexism of the past.  Overall, the generation of filmmakers who I collaborate with really don’t care whether someone is a man or a woman. If you are talented and skilled at your craft then you’ll get hired. It’s the old guard running the studios and networks that are incredibly behind the times.

Filmmaking Stuff: Do you foresee more opportunities for female filmmakers in the next generation?

Helenna Santos: Absolutely!  This is an amazing time to be a woman in the industry.  There is so much happening that it feels like a huge ground swell of support for creating real change in the business.  Doors will only continue to open and the new face of Hollywood will evolve.

Helenna Santos: It might take awhile for us to reach parity, but it’s coming. It’s inevitable. And this journey is going to be a whole lot of fun as long as we support one another, raise each other up, and not blame men for the position we are in but instead work along side one another.

Along with her Ms. In The Biz partner, Alexandra Boylan, Helenna published Thriving In Hollywood: Tenacious Tales and Tactics from Ms. In The Biz.  A complication of essays written by twenty one different women in the industry that’s proving to be both helpful and hopeful for women working in entertainment. 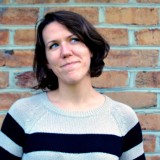